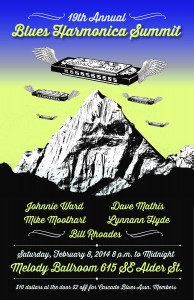 Here we go again! Hard to believe that we’re up to 19 years, with 20 right around the corner.
This is the Original / One and only – Blues Harmonica Summit. We have done the last 18 years at the Melody Ballroom ( Special Thanks to Kathleen) and the 19th will be no different.
The show will be Saturday February 8th from 8:00 pm to 12:00 midnight, at the Blue Heart Cafe (downstairs) at the Melody Ballroom – located at 615 S.E. Alder St. – Here in Portland, Oregon. For info call 503-253-1265 or 503-232-2759
Here’s our line-up for this year!
Starting with a Northwest veteran – Mike Moothart honed his chops early in Eugene, OR. He played in the BlueTones and toured with J. Wood and the Blues Commanders through Australia. After moving to Portland, Mike was a member of the Jim Mesi Band and went on to play a couple years with Jimmy Lloyd Rea and the Switchmasters. For the last few years Mike has been working and raising his daughter and is ready to blow some dust out of those harps.
One of the original old guard of Portland Bluesmen — Johnnie Ward has been a member of of many Blues and Jug bands. His band for a long time was the Jokers and he’s presently a member of the Shark Skin Revue. Paul deLay once said that Johnnie was someone he used to go see play, when he was first learning the harmonica. No surprise there as Johnnie is a really great player of many styles.
Another harmonic fixture on the Portland Blues scene has been Dave Mathis. He played for a period of time in the Liquid Blues Band and was 1/2 of the fine duo of the Blues Police with Steve Cameron. His current spot is blowing harp and vocals with Michael Osborn and the Drivers. He also has a CD out which features his diversity and talent on the harp. Good Stuff!
Traveling over the mountains from Bend, OR. will be one of the Best woman harp players out there. Lynann Hyde basically stole the show at the last Harp Summit she played at and could do it again! We’ll be in real luck as she’ll be bringing her duo partner – guitarist/vocalist Stu Kinzel from their group Kinzel & Hyde. We’ll get to see what they’ve been stirring up on the other side of the mountains.
And last will be your host and Bluesman – Bill Rhoades. Also starting off in Eugene, OR. Bill has had the pleasure and honor of playing with Albert Collins, Jimmy Rogers, Luther Tucker, Michael Bloomfield and many others!
And to top things off, we have an All-Star House Band, which is actually the Party Kings /Queens band.
Now based in Eugene, OR. – Sir Henry Cooper will be on the bill with his trusty slide guitar. Henry also plays with the Sultans of Slide.
Originally from outside Austin, Texas will be Newel C Briggs on guitar. When he was a child, his mother (a gospel pianist) would take him over to be babysat by another pianist – CHARLES BROWN! Now we know where he got all those Blues licks.
And for our third guitarist, we have Chuck Laiti. Spawned and raised in the Puget Sound, Chuck also did his time in Eugene, OR. with Watermelon Slim, Chris Coltrane and the Party Kings. He now teaches school and dreams about Blues, Blues, Blues!
Earlier when I mentioned the Party Queens – that was no joke. On bass guitar we have the most excellent Katie Angel. A longtime duo partner with her beau – Alan Hager, she is well schooled in the Blues.
And last but not least is the always smiling Jolie Clausen. As a member of Norman Sylvester’s great group, Jolie picked up all she needed to lay down a solid rhythm on percussion. Her drumming is fresh and on-time.
So I guess that’s what will warm up a winter night. A lot of huffing and puffing, blowing and drawing, bending and squalling. The 19th Annual Blues Harmonica Summit – $10.00 at the door and as always – $2.00 off to C.B.A. and other card carrying Blues Club / Society Members.
“Keeping the Blues Alive” here in the Northwest!
January 29, 2014/by Wendy Schumer
https://cascadebluesassociation.org/wp-content/uploads/2020/10/CBA_Logo_top_main.png 0 0 Wendy Schumer https://cascadebluesassociation.org/wp-content/uploads/2020/10/CBA_Logo_top_main.png Wendy Schumer2014-01-29 16:42:112014-03-20 21:21:1819th ANNUAL BLUES HARMONICA SUMMIT – Feb 8th

Jim Miller, Portland Loses One Of Its Closest Friends In The Music Communit... An Acoustic Night with Hot Tuna – Feb 18th
Scroll to top