The 2015 Blues Music Awards were held in the Cook Convention Center in Memphis, TN, on Thursday, May 7, honoring The Blues Foundation members’ selections for the finest blues musicians and recordings of the past year. Two of Portland’s most beloved musicians were chosen individually for this award, Jimi Bott for Instrumentalist – Drums and Lisa Mann for I 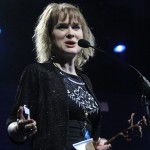 nstrumentalist – Bass. This was Bott’s sixteenth nomination and his first win; for Mann it was her first nomination and follows on the heels of taking home the Blues Blast Award for the Sean Costello Rising Star honor last fall. 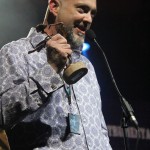 For the first time in its thirty-six year history, the Blues Music Awards was sold out. Those in attendance saw 24 awards handed out and twenty ten-minute sets of many of the most prestigious blues artists performing today, including Elvin Bishop, Keb’ Mo’, Kenny Wayne Shepherd, John Nemeth, John Hammond, and Charlie Musselwhite as well as rising stars like Jarekus Singleton and Selwyn Birchwood. Portland’s own Lisa Mann and Kevin Selfe performed with Candi Staton and Jimi Bott played behind Sugaray Rayford. This year’s big winners were Elvin Bishop taking home three awards, John Hammond with two and Bobby Rush also with two including the coveted BB King Entertainer of the Year Award.

The night also paid tribute to Blues Hall of Fame members with many in attendance, including 2015 inductee Tommy Brown. Also inducted this year but not able to attend were Eric Clapton and Little Richard. The Blues Music Awards celebration was completed on Friday with the grand opening of the Blues Hall of Fame on South Main Street in downtown Memphis, directly across from the National Civil Rights Museum. It’s a beautifully designed museum honoring the inductees who have been the most influential and innovative artists in the genre. A statue of Little Milton holding his guitar on a park bench greets visitors just outside the museum, just one of the many fine exhibits offered.

The 2015 Blues Music Award winners are:

Breezy Rodio The World Mourns The Loss of the King of the Blues, BB King
Scroll to top