The finals for the 2015 Journey To Memphis competition have been set. After two nights in early June at The Lehrer, four acts were whittled out of the sixteen original entries to compete at the Waterfront Blues Festival on The Oregonian Front Porch Stage starting at 11:30 am on July 4. They will perform before three “celebrity” judges, playing 25 minute sets and scored in five categories: blues content, vocal talent, instrumentation talent, originality, and stage presence.

Because we mix both our solo/duo and band competitors together, and all four acts moving on to the Waterfront Blues Festival were bands, we allow the highest scoring solo/duo act from this year to have the right to represent the Cascade Blues Association in Memphis. By using the same judges both nights, the scoring is consistent for all the acts. The highest scoring solo/duo act was Medford’s Rogue Rage Duo featuring Harpo DeRoma and Dan Tiller.

The Cascade Blues Association would like to thank our judges for The Lehrer, John Jaqua, Brendan O’Donnell and Darlene “Blaque Butterfly” Solomon, for volunteering their time over two nights of music. We would also like to thank Brad Lehrer, The Lehrer and their staff for allowing us to use their room and JBL Sound (Jay Lawhorn and Steve Murray) for making everybody sound so great. The Journey To Memphis event team: Wendy Schumer as judge’s assistant, Cherie Robbins as scorekeeper and Andrea Stellar and Jody Gunn who worked as time-keepers. We also want to acknowledge volunteers Winnie Chapman Richards for working the door, Miles and Richard LaChapelle for merchandise sales and board members Jon Pierce, Barry Blackwell and Merry Larsen for various duties.

Please join us on July 4 at 11:30 am as we kick off the final round to determine who will represent the CBA in Memphis as our band entry. Good luck to all. The acts will perform in the following order:

The Cascade Blues Association mourns the loss of one its hardest working board members from the past. Jackson Lee spent several years on the board of directors, was President for a short period in 2002 and served as a faithful volunteer for many years beyond his time as an officer. During his tenure he was involved in numerous projects, including the Acoustic Roots & Blues Heritage: Portland Saturday Market CD, the development of the Journey To Memphis competition and as a committee member with the Willamette Delta Showcase concert series. An avid lover of the blues and music in general, Jackson Lee was a beloved father, uncle, grandfather and friend to many.

Here’s a list of new music received at the CBA office or purchased personally this past month that should be noted:

Summer sure is kicking off in a big way, especially in July. We all know about the Waterfront Blues Festival. Well, how can’t we? It is only one of the premier events in the blues world, and not just within our region. Four days of spectacular music every year and it just keeps getting more amazing every time.

But hold the phone Mabel, that is just a small part of what’s happening in Portland and the area in July. Reading the BluesNotes calendar is going to be quite impressive if you haven’t taken a look at it yet. This is a blues lover’s list of events to be certain with folks like John Mayall, Keb’ Mo’, Bobby Rush, Doug MacLeod, J.P. Soars and that’s only a small part of it people. Then there’s the Cathedral Park Jazz Festival, Wintrhop up in Washington and something new called the Meier Farms Lavender & Wine Festival in Hillsboro on July 25 featuring Boyd Small and others to be announced. And watch for free concerts happening in the city parks, they always include a fair number of blues acts throughout the summer.

But all is not fun and games in the blues world. Life still goes on and our blues community lost a good friend this last month with the passing of my friend and sometimes partner in CBA events Jackson Lee. Jackson was the president before I took the role on when he stepped down. RIP Jackson, I will certainly be one of the many who will miss you.

In good news, however, I want to send out a huge congratulations to Tracey Fordice and Randy Yearout who decided to take the walk down matrimony lane, getting married in a ceremony at The Lehrer in June. In their normal ways, it was a humorous and very enjoyable ceremony and we wish them many years of life together and happiness.

So make the most of your summer everybody. There is plenty of live music going on in Portland all the time, but when the heat of the summer months come up, the music gets more plentiful, too. Must be something in the rain the rest of the year that fertilizes the music of summer. If you can’t find what you’re looking for, then you’re just not looking hard enough. Enjoy everybody!

One of the world’s greatest and most beloved blues-rock power trios returns to Portland for another superb evening of music. From his days with Procol Harum, Robin Trower has been hailed as one of the premier guitar heroes, and his work since those days within a trio ensemble  easily recalls outfits like Cream or the Jimi Hendrix Experience. Trower’s work is every bit as impressive and flocks of guitar students and pros will be lined up in front of the stage to watch him play. More than forty years since the release of his epic album Bridge of Sighs, Robin Trower is proving night after night that he is a guitar hero on par with Clapton and Hendrix.

Robin Trower will be playing on Wednesday, July 1 at The Aladdin Theater, 3017 SE Milwaukie Ave, for an 8:00 pm show. Opening the night will be Seattle blues-rockers Ayron Jones & The Way. Tickets are $42.50 advance through TicketFly.com or $45.00 day of show at the door. Minors under 21 are welcome with a parent or legal guardian.

Over fifty years ago John Mayall was one of the forefathers of the British blues scene that emerged from England’s working class streets and was popularized by British bands such as Alexis Korner’s Blues Incorporated. Mayall’s group, The Bluesbreakers, were ground shaking, deep-in-the-pocket bluesers that ignited the careers of many future rock & roll stars such as Mick Fleetwood, John McVie, Eric Clapton, Mick Taylor, Harvey Mandel, and Peter Green. Now at 81 years of age and over 60 albums to his credit, John Mayall continues to work hard on stages around the world at venues and festivals, still bringing that classic blues sound to the masses and displaying his own skills at songwriting, singing, guitar playing, harmonica, and keyboards.

John Mayall has long been a Portland area favorite and will be returning to town at the Aladdin Theater on Wednesday, July 15 for a 8:00 pm show. Tickets are $30 advance and day of show, and can be purchased through www.TicketFly.com. This event is open to all ages, minors must be accompanied by a parent or legal guardian.

The Banditos sews together honky tonk, R&B and beard-rock sounds in an unforced, carousing-soundtrack way. In 2013, Paste Magazine named Banditos to its list of “12 Alabama Bands You Should Listen to Now.” The band is now based in Nashville and are aimed toward becoming one of the hottest acts hitting the concert circuit across America with their latest self-titled CD, showcasing their raw and ragged sound that comes across in a raucous manner on stage. With a trio of vocalists, including full-belted powerhouse Mary Richardson (who may remind you of Brittany Howard), Corey Parsons, and Steve Pierce, they perform on a variety of instruments ranging from banjo, lap steel and even kazoo. The band is a veritable jukebox of rough-around-the-edges musical styles.

The Banditos will be holding a CD release party at Duff’s Garage on Thursday, July 16 starting at 9:00 pm. This is a Cascade Blues Association co-sponsored event, so show your current membership card at the door and receive a $1.00 discount off from admission. 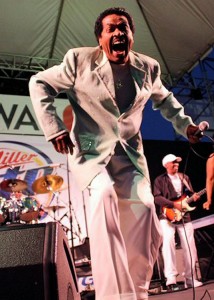 When thinking of Bobby Rush, perhaps American Blues Scene puts it best: Rush is “…the man known as ‘The King of the Chitlin Circuit’… a man who deserves being mentioned in the same context as the blues greats Muddy Waters, Sonny Boy Williamson, and B.B. King.”

Yes, Bobby Rush cut his teeth amongst the greats on the Chicago blues scene in the early 1960s, performing alongside people like Muddy Waters, Howlin’ Wolf, and Little Walter. He has since been a staple on the blues circuit, offering his deep Southern soul-blues revue that has been recognized by Grammy Award nominations, forty-one Blues Music Awards nominations (with ten wins), including 2015 honors as the Soul Blues Artist and the coveted BB King Entertainer of the Year, and induction into The Blues Hall of Fame.

It is pretty rare to find Bobby Rush in the Pacific Northwest in anything other than a festival setting. It is even more unlikely that you would’ve imagined him performing in a remote venue as The Birk. But on Thursday, July 16, Bobby Rush will be bringing all the grit, grind, and soul that has been his trademark since the 1960s to The Birk for a special dinner show starting at 7:00 pm (doors open at 5:30 pm). Tickets are available in advance through www.TicketTomato.com for $25.00 general admission. Ticket price at the door day of show will be $30.00. The Birk is located at 11139 Highway 202 in Birkenfeld. This is Bobby Rush’s only Oregon appearance, so don’t miss it.

Cherie’s Blues Highway’s monthly showcase at The Lehrer offers a truly special engagement on Sunday, July 19 as she brings to the stage United By Music North America. If you caught this group’s recent performances at The Rose Festival or Waterfront Blues Festival stages, you’re already aware of this unique and heartening group of musicians and mentors.

United by Music North America (UBMNA) is an international performance-based program offering opportunities for Artists with musical talents and special needs such as developmental delays, Autism or Asperger’s to enhance their musical abilities.

In North America, the core of UBMNA’s model is collaboration with other similarly missioned groups to develop opportunities in performance. Through workshops, coaching and mentorship with UBMNA’s company of professional musicians, the Artists learn how to prepare for and develop the skills necessary for live performances.

For those who enjoyed United by Music North America All-Star Revue at Waterfront Blues Festival you will recognize the talented PacNW Artists and many of the same professional musician Mentors on stage including our core UBMNA Band: Dave Fleschner, Alan Hager, Jonathan Barber, Sam Hallam.  And yes indeed, there will an extra special guest mentor announced closer to showtime!

Northwest favorites Too Slim & The Taildraggers will be on an extended tour in the region this summer and will return to Portland for an encore performance at Duff’s Garage, 2530 NE 82nd, on Wednesday, July 22. This powerhouse trio, led by the fiery guitar of Tim “Too Slim” Langford are members of the Hall of Fame of three Northwest Blues Societies (including the Cascade Blues Association) and have received various awards and nominations from around the country including prestigious events like the Blues Music Awards and the Blues Blast Awards. The band recently released a two-disc album, Anthology, highlighting many of the best tracks from their Underworld Records catalog plus a handful of newer tunes. Tim just recently battled cancer, so it is a great privilege for us all to catch him back out on the stages once again.

This show at Duff’s Garage begins at 8:00 pm, so don’t get there too late or you’ll miss this always amazing group. This is a Cascade Blues Association co-sponsored event, so have your current membership card handy at the door to receive a $1.00 discount off from admission.