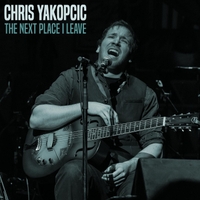 The Next Place I Leave
Yako Records

If you’re a fan of acoustic guitar, then Chris Yakopcic is definitely an artist you should look up. This Dayton, Ohio-based player has a true knack for working in both fingerpicking and slide styles and has proclaimed that he has been heavily influenced by past greats like Big Bill Broonzy and Robert Johnson, who as a solo artists were able to hold an audience’s attention with just their guitar and voice. This is something that Yakopcic accomplishes quite well himself, as a multiple winner of regional competitions for the International Blues Challenge in Memphis, including making the finals in 2015.

On his sophomore release, The Next Place I Leave, Yakopcic is joined by drummer Brian Hoeflich and bassist Leo Smith. But though he has accompaniment, it is his guitar playing that stands out front and center. Recorded at the famed Ardent Studios in Memphis, Yakopcic showcases his string work and songwriting abilities as he flies across the frets on exceptional original material paired perfectly with a handful of covers from Robert Johnson, Fred McDowell and a standout take of Leonard Cohen’s “Tower Of Song” that sounds as if it came directly from the mountains of Appalachia.

Yakopcic is musician who yearns to hit the road and play. He details his journeys with “Sounds Of The Highway” stating that he’d much rather be moving down the roadside than sitting in one place growing old. The theme continues with  “The Next Place I Leave” where he recounts that though he has been to a lot of places, including meeting the devil at the crossroads, it is still just one more place along the way before heading off to find something new. Only a man who is completely in love with his instrument and the history of the music can display guitar playing in such a fine manner. It’s deftly charted and performed on a pair of apparently autobiographical selections, “Smallman Street” and the closing number “My Last Three Strings.”

Chris Yakopcic may have a nice hold on the blues fans in Ohio and Pennsylvania as an acoustic artist of high merit, but give The Next Place I Leave a full-focused listen and you’ll most likely be in agreement with them. This one does warrant that listen.