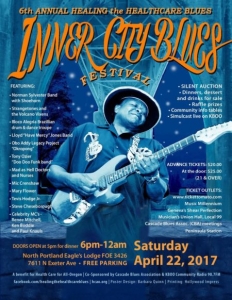 The 2017 Inner City Blues Festival returns to the Eagles Lodge Saturday, April 22. Originally in the 1980s and 1990s, the festival was a community event for various civil rights and social justice causes. Since its return six years ago it has been a major supporter of the cause Health Care For All Oregon, the campaign to bring universal health coverage to everyone (www.hcao.org).

The Eagles Lodge is located at 7611 N Exeter Ave. (at the intersections N Lombard & Exeter). The Inner City Blues Festival will begin at 5:30 pm and run until midnight.  Advance tickets are $20.00 and can be purchased online at Tickettomato.com or at the following outlets: Music Millennium, Geneva’s Shear Perfection, Peninsula Station, Musician’s Union Hall and the Cascade Blues Association’s general membership meetings. Admission at the door day of show is $25.00.