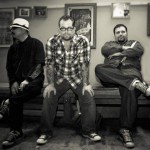 The 44s “play like their life depends on it,” declares guitarist Kid Ramos. “One of the hardest working, hardest playing blues outfits anywhere.”

The Los Angeles-based band plays blues-roots music and have been taking command of stages across the country with its in your face, yet highly contagious sound. Through their vintage instruments and non-stop touring, The 44s have a knack for inciting a party with their feisty stage presence everywhere they appear. It’s raw and greasy, led by the tone-rich guitar work of Johnny Main, with Eric Von Herzen on harmonica, Jason Lozano on drums, and Mike Hightower on bass. Since their band’s inception a decade ago, The 44s have been redefining the West Coast blues sound.

The 44s are one of Portland’s most favorite touring acts, and the attraction’s mutual. Their shows fill up quickly, so make a point to be at Duff’s Garage, 2530 NE 82nd, on Sunday, April 10 for a 8:00 pm show. This is a Cascade Blues Association co-sponsored event, so make certain that you show your current membership card at the door to receive a $1.00 discount on admission.