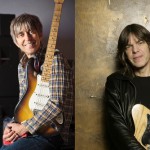 Two of the world’s most adept guitarist players are joining forces for a show that is certain to amaze both fans and players alike. Eric Johnson is able to mesh the sounds of country, blues, pop, rock and jazz and has collaborated with the likes of Sonny Landreth, Jimmie Vaughan, Jonny Lang and Steve Miller. He has also won a Grammy Award along with ten nominations. Mike Stern is a jazz and fusion guitar master with three decades of performances behind him with six Grammy nominations of his own. With the two of them on stage together, expect to be treated to a show that will expand all boundaries possible on guitar.

Eric Johnson and Mike Stern will be performing at The Aladdin Theater, 3017 SE Milwaukie Ave., on Friday, February 6th. Show time is 8:00 pm and minors are welcome when accompanied by a parent or guardian. Tickets are $35.00 advance/day of show and may be purchased at either the Aladdin Theater box office or through www.TicketFly.com.