From early in their childhood in Boulder, CO., Chris and Oliver were steeped in American roots music. The brothers bonded over bluesmen like Jimmy Reed and Lightnin’ Hopkins, but their paths, musical and otherwise, would diverge. Oliver moved to Atlanta and joined Tinsley Ellis’ band, before fronting his own unit called King Johnson working blues, country, R&B and funk as a touring act. Chris attended school at the New England Conservatory of Music studying bass, then became a founding member of Medeski, Martin & Wood performing jazz and abstract music. 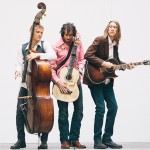 The brothers joined forces in 2006 and have been working together over the ensuing years with their dialed-in vocal harmonies, Oliver’s gritty acoustic guitar, Chris’s virtuosic upright bass, and warrior poet lyrics. The band was made complete with the addition of multi-instrumentalist and drummer Jano Rix, touring endlessly exciting audiences with their Americana and blues music.