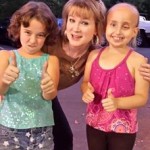 It is going on nearly two years since we first heard the story of little Alyssa Weiser-Lily, better known as Aly, and the friendship that her family developed with local blues player Lisa Mann. After living next to one another for a few years, they actually discovered that they’re related. Well Aly’s story is that since she was 18 months old she has been battling cancer. The fight continues and recent surgery to remove a damaged cornea took place due to recurring infections and now she will be looking at chemotherapy. The family needs support financially to help make ends meet, not only for Aly but her three sisters and parents as well as they do not even own a car to be able to transport Aly to her treatments.

Please plan on attending this worthy cause. Suggested donation is only $5.00, but please give what you can.  If you are unable to be there in person, you can still help out through on-line funding at http://www.gofundme.com/a13wlc   or directly to PayPal at chimpanzen@yahoo.com.