Must Be Crazy
EllerSoul Records 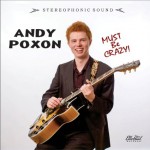 Must Be Crazy is the third release by guitarist Andy Poxon. Today, the word “prodigy” is too commonly thrown around to describe young artists — but in Poxon’s case, it fits. This is a guitarist who’s been playing professionally since the age of nine. His first release at age 18, Red Roots, was produced by the always on-the-money supervision of Duke Robillard. And the Duke’s influence may have played a key role in Poxon’s development of the past few years. Like Duke’s own work, the young Poxon has the means and the know-how to work in a host of bluesy guitar approaches, and all of them are spot on!

Now twenty-one years old, it’s hard to believe that Poxon possesses the talents of such a seasoned songwriter at such a young age. All of the songs on Must Be Crazy have his hand behind the penmanship, with a handful co-written by Delbert McClinton keyboardist Kevin McKendree, who also co-produced the album.

Aside from McKendree, the sidemen on this disc are all top-shelf — Kenneth Blevins on drums, Steve Mackey on bass and Jim Hoke on sax. There’s even another youthful contribution to the track “Rebound” from nine-year-old Yates McKendree as he and his father help throw down a brilliant Booker T-like delivery.

Other fun numbers on this outstanding album include the New Orleans R&B styled “Don’t Tell Your Mama,” fun jump blues with “Next To You,” the jazzy, horn-drenched “I Want To Know” that sounds like it could have come directly from the Roomful of Blues songbook. “Too Late” also has a jazz touch with nice interplay between the soft guitar strumming and McKendree’s piano, and on the other end of the realm the opening title track sends out some gritty Elmore James’ fashioned slide guitar. Backing vocals from Chloe Kohanski and Nashville’s renowned The McCrary Sisters are all sensational, especially by the latter on “Give Me A Chance.”

There are players that truly show remarkable knowledge and skill at an early age with the blues. People like Mike Welch and Sean Costello come to mind as such who continually developed as their career progressed. Throw Andy Poxon into this mix. He is deep, soulful, and quite toneful. If he continues to grow as an artist at the rate he’s moving, we definitely have someone to watch closely. Guitar, vocals, songwriting, he’s got the full package here.