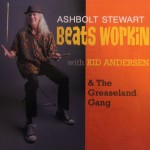 It has taken him fifty years of performing professionally, but drummer Ashbolt Stewart has finally released a recording under his own name titled Beats Workin’. Not that he has not had discs out before with his band Bolt Upright, this one is all his own. And what a superb recording it is.

Ashbolt made a couple trips down to the Bay Area earlier this year, hooking up with Kid Andersen at his Greaseland Studios in San Jose. Andersen is a brilliant studio whiz alongside being one of the West Coast’s top guitar aces playing with Rick Estrin & The Nightcats. And he put his magic to the touch on Ashbolt’s material, giving it enormous clarity and sound.

Over the years Ashbolt has travelled down to Northern California where he plays with a number of good friends in various events. Many of those friends dropped by to lend their hands on this studio outing. With Kid Andersen supplying keyboards and some guitar, other guests included guitar masters Terry Hiatt and Johnny Cat, bassist Steve Ehrmann, and harmonica player Aki Kumar. It all comes across sensationally. These are some of California’s best and it will leave little doubt why they’re amongst the first-call musician for studio and road work.

The material found on the album includes a number of tracks that have long been Ashbolt Stewart staples when performing with Bolt Upright, Dub Dubrie, Buzz Holland, in jams or any of many other partnerships he has worked with over the years. Seventeen tracks, with eight covers he has made his own like “Good Morning Little Schoolgirl,” “Who’s Been Talkin’” and “Sugar Sweet”; one tune written by Buzz Holland, “Bluesed”; one from his wife Susie McDonald, “Up For Grabs”; and the remainder all Ashbolt Stewart’s own penned numbers.

There’s a little bit of everything on Beats Workin’. The disc opens with a beatnik track that could’ve come straight from a 60s coffee bar with spoken word and poetry at hand. That drops right into a rockin’ number “Goin’ To The Roadhouse” where Ashbolt lets loose on drums while the guitars rip it up. The only thing missing from the liner notes is detailing who is taking the guitar leads, as all three are super players it’d be nice to differentiate. There are moments of classic blues standards, followed by some nice funky grooves, and even a little surf. The true surprise is Ashbolt on solo piano for “Center Peace,” a very soft and mellow piece that places a nice break to the usually driving pace laid for on the rest of the album. The album closes with the haunting “Home In One Peace” that almost comes across as a dirge despite its message for a call for peace everywhere.

Smitten With A Kitten / Goin’ To That Roadhouse / Too Many Drivers / Oh Carol / Gypsy / Who’s Been Talkin’ / Bluesed / Route 66 / Center Peace / Blues Down To My Shoes / Good Morning Little Schoolgirl / Up For Grabs / Snatch It Back / After Midnight Blues / Sugar Sweet / Wipe Out! / Home In One Peace