You are here: Home1 / CD Review2 / The Strange Tones

At Home With The Strange Tones
Meteor Sonic Records 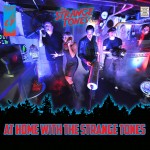 Look out! There has been a serious security breach at The Strange Tones secret headquarters. Perhaps somebody left the garage door open or the back gate ajar. But whatever happened somehow I came into possession of a master copy of their yet to be released CD, titled At Home With The Strange Tones. And I have to tell you, this is going to be a favorite recording by the band for many years to come. Filled with the delicious guitar licks and vocals that are the band’s trademarks, the album hits right on target from the first notes heard and  it doesn’t let up.

The Strange Tones have their own unique flavor in their music. Perhaps you can call it Blues Noir, as it seems the perfect backdrop music for that new Dashiell Hammett private eye novel being put to film (give a listen to the instrumental title track for case in point). Their sound  takes the essences of blues, rock, rockabilly, surf and R&B, tossing it all together and making an enjoyable conglomeration. It works to perfection on stage and comes across on recordings just as entertaining, which in itself is not always the easiest feat for any act to accomplish.

At Home With The Strange Tones offers thirteen new original tracks. Some will obviously sound familiar as they have been staples in their performances for some time, including “Volcano Sacrifice” with its jungle rhythms and animal sounds backed by blistering guitar. There is old school ‘60s style rock like “Cindy Lu;” the slow blues “Weepin’ And Moanin’” with sultry fret solos; Suburban Slim extolling about how “I’ve Got Gas” complete with those slick guitar riffs that remind me a lot of classic Snooks Eaglin numbers – and I mean that in the best way as I love that style; and Guitar Julie has perhaps never come across more potently in her vocal delivery than on the opening two tracks “Lost” and “All There Is To It.”

The dual guitars of Julie and Slim may take the forefront as their vocals also do, but this act would not come across half as well as they do if not for the steady, rock-solid and always on-target rhythm of the two Andys: Strange on bass and Gauthier on drums. Their drive propels the essential Strange Tones heartbeat.

Guest appearances throughout the recording include keyboards from DK Stewart on three tracks, harp work from Jim Wallace on two, Jim Toussaint on violin, Michelle Heile on theremin for one track and Randy Yearout and Tracey Fordice joining in the fun on “Somethin’s Still Following You.”

At Home With The Strange Tones is the band’s fifth CD and it follows right in suit with their previous material. Which in a better definition means a whole lot of fun and excitement in store for all.