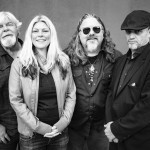 One of the most popular blues bands in the Puget Sound area makes its way back to Oregon in April for one night only at the Trails End Saloon. The Stacy Jones Band has been performing all around the country and just returned from a short tour in The Netherlands. Consistently nominated for and winning BB Awards from the Washington Blues Society, Stacy also received an International Music and Entertainment Association Award for Best Blues Song of 2015 for “Can’t Do Nothin’ Right” from the band’s latest disc, Whiskey, Wine And Water. The hard-working band consists of Stacy on multiple instruments and vocals, her father Tom Jones on bass, Rick Bowen on drums, and Kevin Sutton on guitar.