If you’re seeking the type of album that can straddle the fence between both blues and jazz, say, in the mold of fellow guitarists Ronnie Earl or Duke Robillard, then Barry Levenson’s latest release, The Visit, is going to be right up your alley. Levenson delivers precise phrasing and in-depth tone that strikes true, and he comments that it is a homage to the players who inspired him, bringing forth his own masterful creations in the styling of his heroes. And when those heroes he mentions in the liner notes include Lightnin’ Hopkins, Albert King, Otis Rush, Grant Green, T-Bone Walker, Mickey Baker, Kenny Burrell, and Magic Sam, you know that with one listen to this album he has done his homework and spent a great deal of woodshedding to reach this high quality of product. 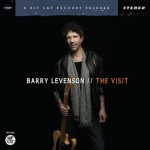 Levenson is not necessarily a vocalist himself, and thus the majority of the offerings on this disc are instrumental. But he has worked as the go-to guitar player alongside a number of musicians over time, such as Johnny Dyer, Pee Wee Crayton, Lowell Fulson, Percy Mayfield, William Clarke, and Canned Heat — stalwart company indeed. They surely know something that the rest of us should be aware of, too: that Barry Levenson is a hell of monster guitarist! There are a few tracks that he brings his voice to the mix and they work well enhancing the songs. Having grown up in Pittsburgh, Levenson was already familiar with vocalist Billy Price, whose last release was a recording of duets with the late Otis Clay. Tapping the singer for a couple numbers, Price lays out prime covers of Albert King’s “You’re Gonna Need Me” and Oscar Perry & Don Robey’s “This Time I’m Gone For Good.”

The instrumental numbers on this disc are extraordinary. Special note to his tribute to his hometown with the tune “Steel City” featuring great accompaniment on the organ from Mike Thompson. Guitar is highlighted throughout with piercing excellence shining on tracks like “The Visit,” “I Wonder Why,” “Shadows At Midnight,” and “Last Train To Nowhere.”

For guitar lovers, both jazzy or bluesy, The Visit is definitely an album worth visiting. Great late night fodder, or any time else for that matter, to enhance your senses.