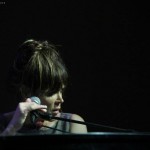 Beth Hart is an enchantress. Discovered performing on the streets of Los Angeles, she has a voice that inspires, transforms, and takes you to the very depths of the human soul. She has collaborated with the likes of Jeff Beck, Slash, and Joe Bonamassa, performed at The Kennedy Center to honor bluesman Buddy Guy and received a standing ovation led by President Obama, has released a handful of albums that have reached toward the top of Billboard’s records charts and earned Grammy and Blues Music Award nominations. An extraordinary songwriter and performer, Beth Hart is the complete package.

On Saturday, September 26, Beth Hart will be making her first stop in Portland after a lengthy absence when she takes the stage at The Roseland Theater, 8 NW 6th Ave. She is currently touring in support of her latest release Better Than Home. Show time for this 21 and over performance is 8:30 pm. Tickets can be purchased in advance through Etix.com from $25.00 – $35.00 (plus service charges).