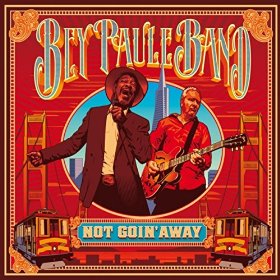 Not Goin’ Away
Blue Dot Records

The Bey Paule Band offers one tight, eight-piece band featuring a number of musicians who have worked with some of the best, including Bey and Paule, with keyboardist Tony Lufrano (Boz Scaggs), bassist Paul Olguin (Elvin Bishop), drummer Paul Revelli (Joe Louis Walker), saxophonist Nancy Wright (Elvin Bishop), and trumpeters Tom Poole (Tommy Castro) and Mike Rinta (Tommy Castro). The disc was produced by Paule, Revelli along with Christine Vitale and Kid Anderson who also adds his own guitar work on a couple of numbers.

The album opens strongly with an autobiographical piece about Frank Bey  titled “Black Bottom” that guides you through his falling in love with music while listening to Southern radio stations, followed by the encounters with musicians that led to his own career performing. But as he states, he is still that same kid from Black Bottom singing the blues with a lot of soul.

Follow that number up with “Kiss Like You Mean It” with the powerful horn section and organ from Lufrano driving the track that seems to invoke the spirit of Otis Redding from within Bey where he states, “you got to, got to, got to hold me tight, don’t let me go, don’t turn me loose . . . “ Or maybe it’s Solomon Burke or Sam Cooke he’s after as he pleads soulfully for his love knowing he’s hurt her and he’ll always hold her words “Next To My Heart.” His sorrow continues in the song “Don’t Ask Me How I Feel.” If you ask he just might break down in tears. You can feel his sadness in his delivery, and Paule’s guitar stresses it even more.

There is no losing track to be found on this fine album. Everybody in the band is spot on fantastic with their playing, clearly stated on the instrumental piece “Noel’s Haze.” And all of the numbers are originals save for two covers that are presented with utmost attention that shines perfectly: Candi Staton’s “Someone You Use,” and the closing selection “If I Could Reach Out” a feel-good number originally recorded by Otis Clay.

In a year that has seen a lot of excellent soul blues recordings, Not Goin’ Away stands out highly. The Bey Paule Band hits it home here and once you listen to this album you’re going to be playing consistently for some time to come. Yes, it’s definitely a keeper.

Billy The Kid & The Regulators
Scroll to top