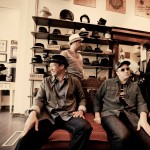 Since their formation in the mid-’80s, Big Head Todd & the Monsters have continued to evolve and explore, moving beyond their Colorado club circuit roots to become one of the most adventurous, respected, and durable bands in America. They have honed their collective stew of influences into a trademark hybrid that’s immediately recognizable. Their current release, Black Beehive is a collection of new studio tracks that bandleader Todd Park Mohr states allows them to truly reach their audience through the language of the blues, something they developed significantly with their previous release 100 Years of Robert Johnson. As the band celebrates their twenty-five-plus years together, the new album will allow them to present their ageless blues and affirm their longevity.

Big Head Todd & The Monsters will be appearing in Portland on Friday, January 15 at 8:00 pm at The Wonder Ballroom, 128 NE Russell. Tickets for this 21 & over performance are available through TicketFly.com for $35.00.