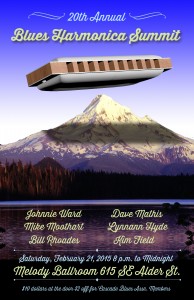 This year’s show will feature one of the world’s greatest women blues harmonica players, Lynnann Hyde! Coming over the mountains from Bend, OR, Lynnann got a lot of attention and turned some heads the last time she was at the Summit!

Though he’s been very ill from cancer treatments, Mike Moothart can still blow the harp better that most players out there and he will be at the Summit ready to prove that.

Making the trek down south from Seattle will be the great Kim Field. If you ever get the chance to read the book “Harp Blowers & Heavy Breathers,” Kim wrote that excellent book about many of the great harmonica players. One of the best from Seattle!

One of our great and eclectic harp men from here in Portland, Johnny Ward will also be on the bill. I say it every time that Johnny plays, you never know what he’s going to come up with and it’s a harp lesson to hear what he does.

Another veteran player from here in Portland, Dave Mathis is appearing at the Summit. Dave currently plays with Michael Osborn and the Drivers and if we’re lucky he’ll bring Michael along for some stinging guitar licks.

And last is your host and harp player, Bill Rhoades, a multiple Muddy Award winner and long-time Northwest Bluesman. Bill brings a vast knowledge of blues music and can wrestle with the blues harp himself!

Backing up all of our featured harp players will be an All Star House Band. If you like blues guitar, three of the Northwest’s finest will be on the bill. From Eugene, OR, Sir Henry Cooper and his unique slide guitar; originally from Austin, Texas, Newel C Briggs and his beautiful fretwork; and “The Orca” Chuck Laiti from here in Portland, with his slashing style!

On drums will be “Sweet” Jolie Clausen, another Northwest Vet. And on bass will be Katey May Angel.  All Blues All The Time!

Don’t miss this Harmonica Party / Show Down / Harp Slingers / Harp Bash / Harp Throw Down / Harmonica Armageddon! No matter what you call it, this is the First, Original and One and Only “Blues Harmonica Summit”! Don’t miss it! I don’t know if we have another 20 years in us. See it while you can!