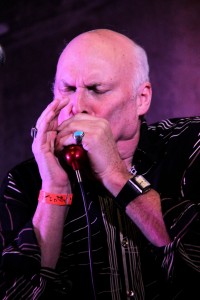 Are you ready? For those of you who’ve been waiting and wondering – we’re back!

At this years show we’re adding some new names and faces. Four of the featured artists have never played the show before. Thought we’d better bring out some of the folks who are making sweet music on the Mississippi Saxophone.

First off, from Seattle will be a fellow who comes highly recommended! I don’t know much about him but they say he can really play! This would be Joe Cook, who has his own

band and is working in the Puget Sound area. We’re looking forward to hearing this gentleman.

Next up is another harpman who they say has a professional sound and who is out there playing in the Portland area. George Discant comes recommended by Arthur Moore and master percussionist Johnny Moore (Jim Mesi Band).

From the lands of the Calapuya will be another new face, William “Froggy” Hyland, who’s been playing here in the Northwest for some time, mostly in the mid-Willamette Valley. He played in a blues band with vocalist Vicki Stevens for a number of years in the Albany area.

Now a more familiar name will be our resident Harmaniac Mike Moothart. A veteran of the Mesi band and The Switchmasters, Mike is still tearing it up on the Harp. Paul deLay once called him “the Greatest Unknown Harmonica Player in the World”

And another fellow from the mid-Willamette Valley at the show will be Blues fisherman Mark Nousen. If you ever hear the sound of the blues harp wafting out over the wheat and cornfields near Harrisburg, OR, that would be Mark.

And last will be one of the newest inductees to the Oregon Music Hall of Fame, Bill Rhoades. Known for making noise with his band The Party Kings / Queens, Bill will also be your host at the show.

Speaking of bands, our House band will be the above mentioned group, The Party Kings/Queens with Chuck “Orca” Laiti on guitar and Texan Newel C Briggs on the other six string. On bass will be marathoner and blues freak Katie Angel and on drums will be “Sweet” Jolie Clausen.

$10.00 at the door. This is a Cascade Blues Association co-sponsored event, so receive a $2.00 discount for all card carrying CBA  members or members from any other blues associations, groups and E.T.C. (Sorry – 21 & Over Only).