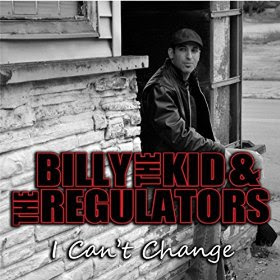 I Can’t Change
Self Produced

While working at the International Blues Challenge over the years, there have been a number of acts that have truly stood out and garnered my attention on the finals stage. Billy The Kid & The Regulators is certainly one of those. So when I received a copy of their latest recording, I Can’t Change, I immediately popped that disc into my player and was instantly reminded of what made this band so special in my mind from their performance. This six-piece outfit hailing from Pittsburgh is led by triple threat Billy Evanochko, a powerful guitarist, vocalist and songwriter. The Steel Town Horns add an additional punch to the band’s sound on a trio of tracks, and guests including harmonica ace Jason Ricci, vocalist Yolanda Barber, guitarists Sean Carney, Damon Fowler (who also produced the disc), and young Micah Kesselring.

The songs included on I Can’t Change are quite memorable. Along with Evanochko, band members Jon Vallecorsa and James Dougherty also were involved with penning a number of the tracks. Excellent covers of Jimmy Reed’s “Can’t Stand To See You Go,” Bernard Roth’s “Who” and especially Robert Johnson’s “Me And The Devil Blues” stand out, and the latter featuring strong acoustic playing from both Ricci and Kesselring alongside Evancohko’s easy going singing. It certainly draws a picture of Southern living that is quite inviting. Of course I have always been drawn to the slow blues, so “Slender Man Blues” hits me right in the core. But the originals truly shine throughout. There is perhaps no let down throughout the entire disc when it comes to musical presentation and lyrics. And whether humorous, like “That Darn Cat,” or punchy like “Saturday Night” and “Ain’t Gotta Prove Nothing,” you pay attention every step of the way. And the one track I keep returning to over and over is “What Are We Fighting For,” as Evanochko ponders just what is going on between him and his partner.

From soulful and funky to outright rockin’, this is an album that can appeal to many tastes — all of them pleasing and full of flavor.  Very much recommended if you want to hear an artist that deserves attention. Onstage or on disc, Billy The Kid & The Regulators is worth checking out and with strong releases such as I Can’t Change it should be a sure bet that we’re going to be hearing a lot more from this band for some time to come!