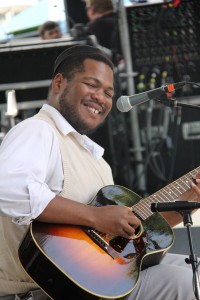 Twenty-four year old Jerron “Blind Boy” Paxton just may be the leading force of the next generation of acoustic blues and roots performers. A swiftly capable multi-instrumentalist who picks banjo and guitar, plays harmonica, piano and other instruments, including the fiddle, this virtuoso is a joyous entertainer, humorous with a smooth vernacular, dazzling wit, a terrific storyteller, exuding an affable excitement. These traits were clearly on display this past summer at the Waterfront Blues Festival where Jerron Paxton was widely acclaimed as one of the surprise hits of the event. He masters multiple blues styles and picks like Blind Blake. He feels home in the Piedmont tradition with its ragtime influence. Country blues fans will pick up on Blind Boy Fuller, Gary Davis, but also on the swampy blues of Louisiana and the Mississippi Delta. He digs deep in the archives of the country blues, from Furry Lewis to Texas Alexander. On the piano he can remind you of Fats Waller, although he cites James P. Johnson and Lucky Robinson as influences. Definitely the full package or as harmonica master Phil Wiggins states, “a musical genius.”