You are here: Home1 / CD Review2 / Too Slim & The Taildraggers 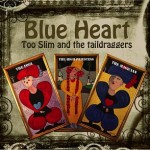 Tim “Too Slim” Langford has always been a fan favorite here in the Pacific Northwest as well as on the touring road. As of late, I just cannot fathom Langford doing anything wrong and that just might include his recent relocation to Nashville. Hate to see him move from the area, but if he is going to produce impressive new recordings like this latest release, Blue Heart, then all the more power to him. His previous two discs still receive a substantive amount of airplay in my car and at home, the brilliant Blues Music Award nominated Shiver and the solo project Broken Halo. I know that Blue Heart is going to be added into that mix right away.

One of the best moves that Langford made in Nashville is hooking up with studio wizard Tom Hambridge, who also takes a position behind the drums on the new album. Hambridge is a master, whatever he seems to be part of in the studio has been turning to gold as of late, working with people like Buddy Guy and James Cotton to name but two. There are other big name guests dropping by to lend their craft, including vocalist Jimmy Hall who also provides a little harmonica on the song title track and keyboard man Reese Wynans. The band is completed by bassist Tommy MacDonald and Rob McNelley on second guitar.

The music on Blue Heart is what you would expect from Too Slim & The Taildraggers. It is killer knock-your-lights-out guitar as only Langford can deliver. He may come at you with a little swampy feel as on “Blue Heart” or “Wash My Hands,” with a pure Chicago-drenched guitar such as “Good To See You Smile Again” with Jimmy Hall behind the mic, the rockin’ power of “Shape Of Blues To Come” or the acoustic slide on the closing “Angels Are Back,” but it is all awesome and completely originally penned material by Tim Langford.

Okay, so maybe we didn’t want to share Too Slim & The Traildraggers with the rest of the world. We wanted to keep him tucked up here in the Northwest where we can easier boast of his talents. But by God if he is going to move away, let him be heard by the masses. Listen up to all of those who may not know of Tim Langford (and if you are a true follower of the blues that should not be too many of you), Blue Heart is an album that is set to render your blues-rock taste-buds on notice. Spicy, sizzling hot guitar by one of the best players in the business.

Tracey Fordice and the 8-Balls Southern Hospitaility
Scroll to top