You are here: Home1 / CD Review2 / Blues From Eugene: An Eclectic Collection, Volume 1 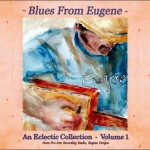 Eugene, Oregon has long held a wealth of history and talent when it comes to the blues. The Northwest’s first blues society originated here and musicians such as Curtis Salgado, Robert Cray, David Jacobs-Strain, Henry Vestine, Bill Rhoades, DK Stewart, Watermelon Slim and many others cut their teeth establishing the city’s music scene. That original blues society may be long gone, with the Rainy Day Blues Society picking up within the last decade, but there are still an impressive number of artists calling the city home. Recordings like Blues From Eugene: An Eclectic Collection,Volume 1 serve a great purpose in bringing to light just how rich and diverse the talent runs that people elsewhere may be unaware of.

Artists that many within the Northwest are familiar with are well represented here: Hank Shreve, Joanne Broh, Barbara Healy, Paul Biondi, Walker T. Ryan, Henry Cooper, Al Smith and Jerry Zybach among them. And you could not have a retrospective of the Eugene blues community without including its patriarch Eagle Park Slim. But this is a great introduction to those perhaps a little less known or just flat out deserving more attention like Lynda Duffy, Steve Ibach, Lloyd Tolbert or Dennis Smith. The music spans various styles, all well done and nicely produced by Anthony Proveaux and Jerry Zybach. All tracks were recorded at Pro-Arts Recording Studio, mostly done live which adds to the overall pleasing results.

Like any compilation of a region’s music collective, it is nearly impossible to include everybody in a single disc. Eugene remains a great haven for the blues today and this impressive sampling is worth checking out, with great hopes that a volume 2 will be on the horizon as well.