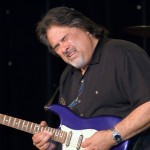 Coco Montoya just may be one of the premier blues guitarists of the day. Mentored by Albert Collins and spending a decade playing in John Mayall’s band primed Montoya for a solo career that has seen him filling venues and performing on festival stages around the world. A past Blues Music Award winner, Billboard magazine had this to say about Montoya: “In a world of blues guitar pretenders, Coco Montoya is the real McCoy. Be prepared to get scorched.” Always a sensational, exciting show filled with his toneful playing that can light up a room, Coco Montoya has long been a fan favorite touring artist in Portland.

Coco Montoya will be returning to The Rose City for an evening at Jimmy Mak’s (221 NW 10th) on Wednesday, August 21st, starting at 8:00 pm. Tickets are available at www.tickettomato.com and are $18.00 for guaranteed seating and $15.00 for general admission.