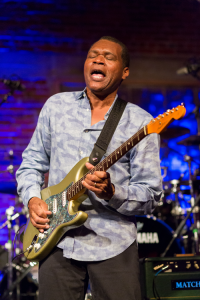 Blues Hall of Fame inductee and five-time Grammy Award winner Robert Cray returns to Portland for one night only at The Aladdin Theater on Saturday, March 4. Rolling Stone Magazine credits Cray’s stellar 1986 release Strong Persuader as reinventing the blues with his “distinct razor sharp guitar playing introducing a new generation of mainstream rock fans to the language and form of the blues.” Considered one of the greatest guitarist of his generation, Cray has recorded more than fifteen Billboard topping albums and has worked with the best of the genre, from John Lee Hooker, Stevie Ray Vaughan, Eric Clapton and Bonnie Raitt and so many more. His newest release, Robert Cray & Hi Rhythm, will be hitting the stores in April featuring his soulful rendition of that flavorful Memphis sound, so expect to hear new tunes from the upcoming album.

Show time for the Robert Cray Band’s performance is 8:00. The Aladdin Theater is located at 3017 SE Milwaukie Avenue. Tickets are available at Ticketfly.com and at the box office day of show for $45.00. All ages are welcome, minors must be accompanied by a parent or guardian.

Birds of Chicago – Soulful duo with a steady fusion of R&B, Blues...
Scroll to top