Boise, Idaho is certainly not the first place anyone would think of as producing one of the most sought after blues artists working today, but John Nemeth has come a long way from his beginnings there. His travels have landed him at home in Memphis where he put together perhaps his finest album to date, Memphis Grease. That album has earned him six nominations for this year’s Blues Music Awards, including the coveted BB King Entertainer of the Year Award. The Blues Music Awards show will take place in Memphis on May 7 and John Nemeth will be present at the ceremonies. Now that may seem odd considering that in order to do that he will have to split dates in Oregon on both sides of that show. 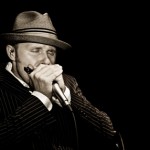 After flying to Memphis for the Blues Music Awards, Nemeth will return to Oregon on Friday, May 8 for a performance at Jimmy Mak’s, 221 NW 10th. Showtime is 8:00 pm. Advance tickets are available through TicketTomato.com, $16.00 for reserved seating. This is a Cascade Blues Association co-sponsored event and members can receive a $2.00 discount on admission when purchased in advance, using the code “CBA” until May 7.