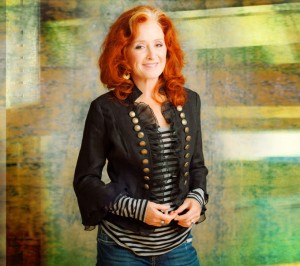 Bonnie Raitt is without doubt one of American’s most beloved blues and roots performers. Over the past four decades she has released sixteen albums, received ten Grammy Awards and has been inducted into the Rock & Roll Hall of Fame. Her tours across the country sell out continuously and she has shared stages with the biggest names in the industry including Ruth Brown, BB King, Taj Mahal, Keb’ Mo’, Sippie Wallace and an endless list of others.

Touring in support of her most recent recording, the Grammy-winning Slipstream, Bonnie Raitt returns to Portland for a performance at the elite Arlene Schnitzer Concert Hall on Saturday, October 12th at 8:00 pm. Tickets are available through www.portland5.com or www.ticketswest.com, with prices ranging from $55.00 to $112.50. But move on these tickets quickly, as Bonnie always sells out in Portland.