You are here: Home1 / Cascade Blues Note2 / Bottleneck Blues Band Will Get You Up on the Floor and Dancing the Night ...

Picture those old-time dance contests. The ones where the dancers groove the night away and nearly pass out on the 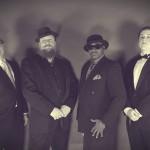 floor, but are having so much fun they won’t stop until they drop. Now you’ve just envisioned the dance floor at the end of the night after the dancers have danced to Bottleneck Blues Band.

The band covers the classics and performs originals that will make you want to dance the night away. Their Facebook pages describes it this way, “Imagine Albert Collins meets Jimi Hendrix jamming with the Allman Brother Band. Bottleneck Blues Band will pull you in, get you moving, and make you feel alive.”

The band
The four band members that form this phenomenon hail from all around the country—Indiana, New York, Michigan, and Oregon, but came together to form Bottleneck Blues Band five years ago. Noah Bell plays guitar and handles vocals; Seth Zowader plays keyboards; Devon Shazier mans the drum kit; and Ethan Bear rounds out the quartet on bass. “We just added Ethan this summer. Dave Cushman, our original bass player, had to leave the group due to life issues,” according to Noah. Dave and Noah started the band out of their love for the blues.

All the guys have been serious about being professional musicians from a young age. Noah bought a guitar at a garage sale at age five and had always wanted to play music for a living. Seth began playing keyboards as a child and Devon grew up playing in church.

When not on stage, two of the guys still work in music industry. You can find Noah and Seth working at Portland Music Co. in Beaverton. Noah is the assistant manager and has been there for 15 years. Seth is the keyboard guru and has been employed there for five years.

Influences
“We are followers of the three Kings: BB, Albert, and Freddie. We also listen to a lot of Buddy Guy, Howlin’ Wolf and Muddy Waters,” Noah said. Other influences are Clarence Gatemouth Brown, JJ Cale, Willie Dixon, Robert Cray, and Albert Collins. These artists have help shaped Bottleneck’s music—their sound. “Our music is red hot funky blues. The kind that make people dance.” And boy do they dance!

CD’s
Bottleneck Blues Band released their first CD (self-produced) in December 2014, Twenty First Century Blues. Most of the tracks were first-take recordings. “The delivery is authentic. There is no over-embellishment that you’re likely to find with a lot of newer acts these days, and because there is no over-playing you are treated to a steady pulse that is raw and natural. Everything flows nicely,” said Greg Johnson, CBA President. (See the February CBA BluesNotes for the complete CD review.) They are currently writing their second CD. Noah says several of the tunes have made it into their set list.

Experience
With over 25 years of playing music, Noah has opened for a wide variety of top notch musicians from reggae’s Steel Pulse to the King of country music, Willie Nelson. He’s also opened for various members of the Grateful Dead, including Bill Kreutzmann, not to mention classic blues man Elvin Bishop. He also has a degree in guitar from Missouri State.  Seth trained at Berklee College of Music. “His masterful organ technique has thrilled spectators leaving them amazed at his sonic prowess.” Devon started playing the drums in church at a young age. His radical beats have amazed audiences across the US. Steve Rodriguez, owner of the Blue Diamond in Portland, OR, says “I can’t believe he keeps going the whole three hour set.”  The newest member of the band is Ethan. The Oregon native has been playing the blues since he started performing live up and down the coast. “His vibe has taken the band to a new level of excitement. This kid has skills as he holds down the bottom like an old pro. He plays like he has something to prove and the people respond” Noah said.

In Closing
Noah has a philosophy about blues, “Blues is music of life, love and loss, happiness and sorrow, and everything that happens in between. All these emotions come to life, and the standard grooves live again while Bottleneck lights up the dance floor.” You have to experience it yourself.