You are here: Home1 / Past PDX Blues Event 20132 / Bring Your Sweetie (not required) and Dance Shoes to The Lehrer for the...

Hello CBA members! It is February already and time for the annual Sweetheart’s Dance. This year the event is being held at The Lehrer, which is at 8775 SW Canyon Lane, Beaverton. If you haven’t been there yet, this is the perfect time to check out one of the best new West Side venues around. You might say “Westside, all the way out there?” But wait, it’s not that far off the beaten path! Just take the Canyon Road exit off Highway 26. Just as you get to the business area, you take the first road to your right, and it is in the shopping center across from you! Not far at all from downtown Portland, possibly a 15 minute drive!

This year, Brad and the folks at The Lehrer will be offering Valentine Dinner Specials. You will enjoy being in a venue with great food, a large dance floor and the best music in town. This is a must do for Valentines! 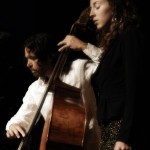 We are starting the evening’s music at with Julie & Dean, and friends. If you were lucky enough to attend the January meeting, you were delighted to hear Julie Yanko & Dean Mueller team up with Chris Carlson for the opening set. This pairing of a Jazz vocalist and upright acoustic bass is a magical combination that leaves nowhere to hide. A setting, reserved for the most qualified artists, is a mingling that Julie Yanko and Dean Mueller bring together with unexpected delight. Julie, a strong, yet sweet voice, is reminiscent of the 50’s when female singers ruled the jazz and blues world.. Her repertoire combines the jazz of Billy Holiday with the sound of Nina Simone and the sophisticated country of Patsy Cline. Dean’s bass playing is rooted in the blues chops he earned playing with the finest blues legend in America and touring with the award winning international act, The Insomniacs.
At this year’s Sweetheart’s dance they will be teaming up with Chris Carlson on guitar and Carlton Jackson on drums. Chris Carlson has performed with them on several occasions and brings the experience and guitar mastery required to cross the boundaries of jazz, country and blues. Carlton Jackson’s versatility and sensitivity provide the perfect rhythmic backdrop and space for Julie’s lovely voice. Plan to come early and enjoy this fresh take on a bygone era that is intimate, alluring and hauntingly beautiful. A perfect dinner setting.
Next up, put your dancing shoes on, because here comes The Beacon Street Titans. Their 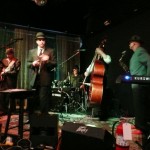 set starts at 9:15. The Beacon Street Titans are a favorite hometown swinging jump blues band that is made up of talented musicians with heavy credentials behind them. Harmonica player, vocalist and saxophonist Howard McClung has been playing since he was 15 and has worked with numerous bands throughout the years. Saxophonist Daniel Covrett played in Ann Arbor and Seattle before relocating to Portland and has been involved with acts like The Del Vikings and The Blue Front Persuaders featuring Steve Lucky. Guitarist Daryl Boggs is originally from El Paso and worked in the Los Angeles area playing various forms of roots music and Americana with bands who have opened for people like Mike Morgan & The Crawl, Kid Ramos, Robben Ford and Big Sandy, while also doing session work with John “Juke” Logan. Bassist Steve Maliszewski is a self-taught player who studied classical music in college and worked up and down the East Coast and across Canada with bands prior to coming to Portland.
This band has a truck-load of credits behind them, from different backgrounds for sure, but together they blend into a sensational performing machine with variations of R&B, soul, jazz and blues that will definitely satisfy our musical cravings.Finally we will finish off the evening with Portland favorite, Franco Paletta and The Stingers. Get ready to “Catch a Blues Buzz.” Franco and the Stingers go on at 11:00. Since breaking into the Portland Blues scene in the Mid-80’s , Franco Paletta has become a mainstay for the city’s Blues fans. His dynamic harp style and unique vocals has made him one Portland’s favorite Blues personalities.

Franco Paletta and The Stingers won the Journey to Memphis competition and headed off to represent the CBA at the International Blues Challenge in Memphis, TN in 2012. They also have 2 CD’s, Can’t Kick Love and I Like it Like That, playing internationally, both on broadcast and satellite radio.
The band plays locally and at multiple blues festivals around the country and we are so happy they are in town as we haven’t been able to catch his show in a while. This Chicago Style Blues Band will makes you want to stay up out of your seat and continue dancing the night away. Franco’s unique vocals and dynamic harp, along with the best players on the local scene and beyond, make this a “must see” Blues act, anytime, anyplace and we got him!So mark your calendars and don’t miss out for one of the hottest events in town! Remember it may be called the Sweetheart’ Dance, but that’s because we consider all our members and local blues lovers, Sweethearts!
Come on out, dance with the group, and meet a couple of new friends!
FEBRUARY 15TH
7:30 – 12:30
Dinner Specials
Great Music
8775 SW Canyon Lane, Beaverton

For a rockin’ night of music, go see the Mike Branch Band Mitch Kashmar’s harmonica playing will blow you away
Scroll to top