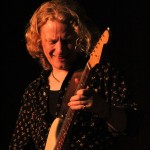 Considered one of the greatest modern blues guitarists from England today, Matt Schofield has collected numerous awards for his recordings and performances in his home country. With a style that can be compared to contemporary guitarists like Robben Ford and Buddy Guy, Schofield has the prowess to command a stage and draw guitar enthusiasts to watch his playing closely. With each new tour of the United States he builds his fan base even more and with good cause as the accolades he has received are well founded as demonstrated on his latest recording Far As I Can See.

Schofield started his United States touring with a performance in Portland just a few years ago. The small crowd on hand that night have been making a point to return every time he comes back to town and the audiences have been growing larger with each successive appearance. Matt Schofield brings back his outstanding guitar showcase to Portland on Friday, July 25th to the Star Theater, 13 NW 6th Avenue. Tickets are available in advance through www.Ticketbiscuit.com at $22.50. This is a 21 & over event, showtime is 9:00 pm.