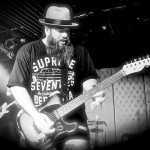 Harlis Sweetwater hails from Southern California and while he’s renowned as an exceptional guitarist and songwriter, he is also hailed as one of the greatest vocalists of any genre you may encounter. He formed the Harlis Sweetwater Band in 2012 to get back to the Blues/Soul and Americana music he loves, enlisting fellow musicians Jimmy Sena on drums and Jason Holser playing bass; both with extensive recording and performing experience, to lay down a solid foundation of groove for his wild, bluesy & intense guitar playing and husky soulful voice. The chemistry of the band’s players makes for high energy performances that both entertain and mesmerize, and often the party on stage rivals the one in the audience, making the Harlis Sweetwater Band one of the more fun and entertaining bands to see live. The band’s two albums, Lights Goin’ Down and Put It In Dirt have received rave reviews from around the world.

The Harlis Sweetwater Band will be touring Oregon in late September, including a stop at Duff’s Garage, 2530 NE 82nd, on Thursday, September 24 for a 9:00 pm show. Admission is $7.00. This is a Cascade Blues Association co-sponsored event, so bring your current membership card to receive a $1.00 discount at the door. Opening the night will be Lightnin’ Willie and the Poor  Boys. (See separate article ) This is sure to be a dynamic double headed bill.

Make a point to catch this up and coming band while in our area!

September 2015 Bandstand Dave & Phil Alvin with The Guilty Ones Coming To The Aladdin Theater-Sept....
Scroll to top