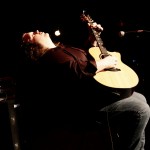 Matt Andersen may not be the most recognized performer hailing from Canada, but he certainly belongs among those who deserve the attention. Hailing from Perth-Andover, New Brunswick, this will be Andersen’s first appearance in Portland when he takes the stage at Mississippi Studios on Friday, January 24th. His narrative-driven writing cuts through the soul, blending blues and folk, encompassed in total honesty. He takes listeners on a ride with his diverse musical styles, skilled guitar work and over-the-top showmanship. Matt’s intimate, high-energy performances have captivated audiences across the world, from Canada, to the US, to Australia and the UK, from small clubs to festivals. Andersen has been honored multiple times with the Canadian Maple Blues Awards, including receiving the Entertainer of the Year and Acoustic Artist of the Year in 2011, a British Blues Award nomination in 2012, and he was the overall winner of the International Blues Challenge in the Solo/Duo competition in 2010. He is currently on tour in the United States and Canada to promote his forth-coming CD Weightless, which will be released on February 4th.