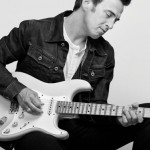 esman Colin James has been inducted into the Canadian Music Hall of Fame, he has won six Juno Awards including Male Vocalist of the Year and an astounding seventeen Maple Awards including Entertainer of the Year in 2013. Mentored by the late Stevie Ray Vaughan, James has released 16 albums over the past 25+ years, his most recent being Hearts On Fire working with longtime friend and collaborator Colin Linden.

It has been a few years since Colin James last performed in Portland, so his show coming up at The Alberta Rose Theatre is a rare opportunity to see one of Canada’s most prolific and dynamic entertainers in our city. James will be playing at the theater on Thursday, October 8, at 8:00 pm. Tickets can be purchased at albertarosetheatre.com, $20.00 advance, $25.00 at the door day of show. There are also preferred seating available for $30.00 for the first few aisles front and center.