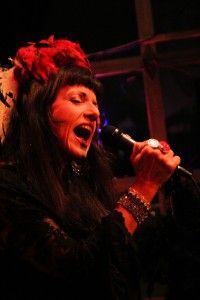 The story of Candye Kane’s long time battle with cancer has well been documented over the past few years, yet while many musicians who face this situation may have set aside their performances, Candye still hits the touring circuit bringing joy and entertainment to her fans despite the pain and discomfort. That truly earns her the title of the Toughest Girl Alive more than just another song in her repertoire. As anybody knows who has witnessed a Candye Kane show, she gives her full energy, emotion and personal love into each and every performance.

Armed with a number of outstanding releases garnering awards and nominations and one of the sharpest and adept guitar slingers on the planet with Laura Chavez, a Candye Kane show is one that should be on every blues lovers list of must see performances every time she comes your way. Filled with humor, often very risqué, her songs are social and quite telling of her own personal journeys as she proves she is a songwriter as well as a singer of high merit.

Candye Kane’s shows fill venues everywhere she goes and locally she has a huge following of fans and supporters. She will be returning to our area in early December for a pair of shows.

On Thursday, December 4th, Candye will appear at The Birk for a dinner show starting at 6:30 pm.The Birk is located at 11139 Hwy 202 in Birkenfeld, Oregon.

Then the following night, Friday, December 5th, she will be making her annual appearance at Duff’s Garage, 2530 NE 82nd in Portland. This is a 9:00 pm show and guaranteed to have a full house so get there early. Admission is $15.00. Advance tickets are available through TicketTomato.com. This is a Cascade Blues Association co-sponsored event, so make sure to show your membership card for a $1.00 discount at the door.