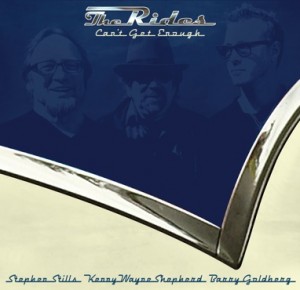 In a time that it seems that so-called “super groups” are emerging somewhat frequently, The Rides are one that mixes a couple of the originators of the concept with a young guitarist who is certainly accustomed to working with legendary musicians. Stephen Stills and Barry Goldberg are icons of the 1960s rock scene and were participants in arguably the first of the ideas of all-star blues-rock gatherings, teaming up with Al Kooper and Michael Bloomfield on the Super Sessions album. From there their careers blossomed with Stills in Buffalo Springfield and Crosby, Stills & Nash, while Goldberg went on to work with the Electric Flag and more recently the Chicago Blues Reunion (yet another super group). Kenny Wayne Shepherd did a full tour, film and recording playing with the elder legends of the blues for which he earned a Grammy nomination, received a Keeping the Blues Alive recognition and a Blues Music Award. Throw in Stevie Ray Vaughan’s former drummer, currently working with Kenny Wayne Shepherd, Chris Layton, and bassist Kevin McCormick who has worked with seemingly half the rock and blues world ranging from Jackson Browne and Nils Lofgren to Ted Hawkins and John Mayall, and you’ve got a right formidable outfit going.

The tracks on The Rides’ debut recording Can’t Get Enough are as expected blues-rock. The guitar work on the selections can be pretty strong at times, but for the most part with a few exceptions, this album works. But then again, that is probably my taste and as always music is a matter of each person’s individual perception. The disc opens with the bluesy grinding “Roadhouse,” telling the woes of working as a bar band in back road bars where you’re never quite certain if the people really care if you’re there or not despite the troubles you’ve gone through to get there. Stephen Stills delivers exceptional vocals in the slow blues “Don’t Want Lies.” Of the ten selections, only five are originals, including the final number “Word Game” which in reality is a song wrote for Buffalo Springfield back in the day, but was never recorded by that band, though it did appear in the 1970s on Stills’ solo outings. The other half of the disc offers covers from some un likely sources such as a sound-alike take of Neil Young’s “Rockin’ In The Free World” and most unexpectedly Iggy Pop’s “Search And Destroy.” There is an enjoyable take on the Big Maybelle song “That’s A Pretty Good Love,” and Elmore James’ “Talk To Me Baby” is also nicely covered. Perhaps the highlight of the non-original material is Muddy Waters’ “Honey Bee” with searing guitar that makes this one ring true.

Overall, The Rides are an interesting combination and for people who enjoy their rock on the bluesy edge, this one will probably fit your tastes. It has been a long ride since that Super Session album, but Goldberg and Stills still have what it takes to keep up with youngster Shepherd and there may be a lot of similarities in the concepts of that seminal recording with this one. They band works well together and have been doing some tour dates with the band. But only time will tell if The Rides will have that lasting quality as that predecessor. They certainly have the right stuff to make it so.