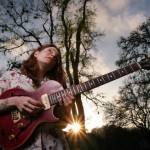 A musical force equipped with the soulful vocals of Janis and the guitar slinging skills of Stevie Ray, Carolyn Wonderland reaches into the depths of the Texas blues tradition with the wit of a poet. She hits the stage with unmatched presence, a true legend in her time. For more than twenty years this multi-instrumentalist has been a leading force on the Austin blues scene and a major draw at festivals and venues across the country, with a handful of first-rate recordings and several appearances on Austin City Limits.

Wonderland will be bringing her rocking band back to Portland for another sure-to-be thrilling night at the Alberta Rose Theater, 3000 NE Alberta Street, for a 8:00 pm show on Tuesday, February 10th. All ages are welcome, minors must be accompanied by a parent or guardian. Tickets may be purchased through www.albertarosetheatre.com for $16.00 general admission in advance or $18.00 day of show.

It Was Party Time On New Year’s Eve At Duff’s Garage! Ian Siegal
Scroll to top