Descendants Of Hill Country
Self Produced 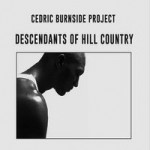 The name of the album says it all, Descendants Of Hill Country. Perhaps nobody playing today has the legacy and the depth of knowledge when it comes to the Hill Country music of Northern Mississippi better than the musicians in the Cedric Burnside Project. After all, both Cedric and his uncle Garry are products of the RL Burnside family, and Trenton Ayers’s father was Joe Ayers, the bass player for Junior Kimbrough’s band. These guys grew up listening to the region’s music directly from its masters and playing in the aforementioned artists’ bands while still in their teens. Though they may often have a modern approach to the pounding pulse and drive within their own compositions, it is always honest in presentation and true to the original form. As stated in the opening track, they were “Born With It.”

All three of the musicians can shift easily between guitar, bass, and drums, with both Cedric and Garry sharing vocal duties. Most of the songs are originals written by the three, but they also offer covers of RL’s “Going Away Baby” and “Skinny Woman.” The stories told throughout the songs are all common — hard times that bring them down on their luck with women, gambling, and money woes. But there is also a nice tribute to the soldiers serving overseas who are going through strife and pain that we never see at home because of their sacrifices afar for freedom. And Cedric offers a couple ballads about how true his love really is with “Just You Wait And See” and the closer “Love Her ’Til I Die.”

For the past couple of decades, the Hill Country music has really defined the blues of its region. It has always been around, but the popularity that took off with the Fat Possum releases of RL Burnside, Junior Kimbrough, Cedell Davis, T-Model Ford, among others that introduced many listeners to the Hill Country Blues. The Cedric Burnside Project continues that legacy and has been bringing it even more to the forefront as Descendants Of Hill Country recently received a Grammy nomination and is up for multiple Blues Music Awards this year, too. This is a traditional blues that defies generations and The Cedric Burnside Project has clearly put forth a masterful recording with this one.