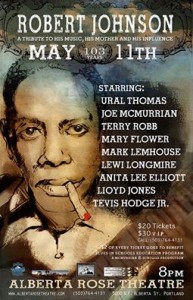 Robert Johnson is perhaps one of the most mythical and most highly acclaimed bluesmen of the 20th Century. With only 29 songs recorded before his premature death at age 27 in 1938, he changed the world when it comes to the way that music sounds and is being played. Though not as well known in life as he is in death, Johnson has influenced generations of guitarists with his masterful string work with those few songs that have etched their way into the vocabulary of the most recognized tunes ever written. And they continue to work their magic on newer guitarists today.

In 2011 there were a number of concerts held around the country in recognition of Robert Johnson’s 100th birthday on May 8, 1911. One of these shows took place at Portland’s Alberta Rose Theatre to high praise. Now, three years later, an encore presentation of the music of Robert Johnson will once again take place at the Alberta Rose on Sunday, May 11th. The concert will be another amazing line-up of some of the Portland area’s finest blues and roots artists. Included in this show will be Mary Flower, Ural Thomas, Terry Robb, Joe McMurrian, Mark Lemhouse, Tevis Hodge Jr, Lloyd Jones, Lewi Longmire & Anita Lee Endicott and more to be announced.

Showtime for the Celebration of Robert Johnson’s 103rd birthday is 8:00 pm. The Alberta Rose Theatre is located at 3000 NE Alberta Street. This is a 21 and over only event. Tickets are $20.00 general admission or $30.00 preferred seating in the first five rows and are available at www.albertarosetheatre.com. This is a Cascade Blues Association co-sponsored event, members can receive a $5.00 discount when ordering on-line by using the code “CBA.” As a special bonus for the CBA, for every ticket sold after the show expenses for the Alberta Rose has been met, $2.00 will be donated to the CBA’s Blues in the Schools program which show producers Joe McMurrian and Joey Scruggs would like to help revitalize. Thanks guys!