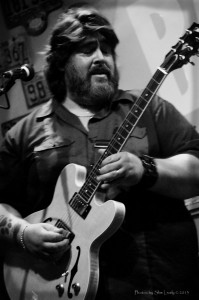 One of the most exciting bands out of Chicago today, the Nick Moss Band, will be returning to the Pacific Northwest in November with two Oregon gigs on their calendar. With sixteen Blues Music Award nominations under their belt, this cutting edge outfit features the stunning guitar work and vocals of Nick Moss and second guitarist Michael Ledbetter with his soul-stirring vocals. The band has released eight albums with a new one scheduled for early next spring. The Nashville Blues Society states: “Nick Moss continues to push the boundaries of traditional blues while keeping his music vital and forward-thinking for blues fans in the 21st Century.” Always dynamic, Nick Moss is a not to miss show.

The Nick Moss Band will be appearing at Duff’s Garage (1635 SE 7th) on Wednesday, November 20th for a 9:00 pm show. Admission are $12.00 and this is a Cascade Blues Association co-sponsored event, so show your card at the door for a $1.00 discount on admission.