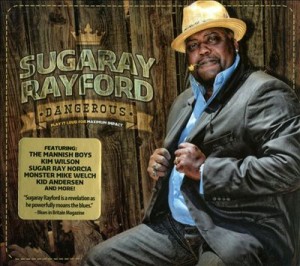 Sugaray Rayford is a modern day blues shouter with a voice so strong it is hard to take your attention away when he sings. Like many people, I had my first exposure to Sugaray at the 2006 International Blues Challenge. As part of the second place winners Aunt Kizzy’s Boys from San Diego, Rayford took total command of the stage at the New Daisy Theater, gliding and dancing his way back and forth as he enchanted the audience with his fierce vocals and energy. He is a mighty presence indeed. Since that appearance, his career has been on an upward spiral. He joined the Delta Groove family as a member of The Mannish Boys, taking on the vocal role when their leader Finis Tasby took ill. He also did a stint as one of the lead characters in the play Ain’t Nothin’ But the Blues when it did its run in Portland a year ago. Now, Delta Groove has given Rayford the chance to create his own album, and it is filled with all the dynamics you’d expect from him.

The album, titled Dangerous, is everything you’d expect from the Delta Groove label, packed full of their stellar line-up of musicians and friends to help with the cause. Rayford is definitely not intimated by their presence, as he holds center court throughout the disc. Among those musicians taking part are superb guitarists like Franck Goldwasser, Monster Mike Welch, Kid Andersen and Gino Matteo. Harmonica players are in full force throughout, with offerings from the likes of Kim Wilson, Randy Chortkoff, Sugar Ray Norcia and Big Pete. The rest of the players is also like a who’s who of the blues with Jimi Bott on drums, Anthony Geraci and Fred Kaplan on keys, Willie J. Campbell and Bill Stuve laying down the bass groove, and Mark Pender and Ron Dziubla on horns. If one is judged by the company he keeps, Sugaray Rayford is without doubt a blessed individual.

Highlights on Dangerous are numerous. Franck Goldwasser is sensational on guitar on tracks like Pee Wee Crayton’s “When It Rains It Pours” that is the perfect foil for Rayford’s voice; also enhanced beautifully by Fred Kaplan’s piano. Goldwasser is also on top with his slide work on Son House’s “Preaching Blues” and on the National Steel for Rayford’s original “Need A Little More Time,” a country blues piece with Jimi Bott and Randy Chortkoff providing the only other instrumentation.”Keep Her At Home” delivers a nice Texas boogie to the mix and “Goin’ Back To Texas” finds a slow walking blues behind the expressive harmonica work of Kim Wilson. Sugar Ray Norcia joins Rayford for the appropriately named track “Two Times Sugar,” with Monster Mike Welch laying down outstanding guitar. And Rayford’s own “Stuck For A Buck” relates to just how hard times can be, where taxes, pawn shops and jail make it so one cannot seem to get ahead.

This is a stellar debut for Sugaray Rayford on the Delta Groove label. The man is a natural who can belt out a tune with the best of the blues shouters. Yeah, he’s Dangerous . . . Dangerously great!

Shawn Holt And The Teardrops The Rides
Scroll to top