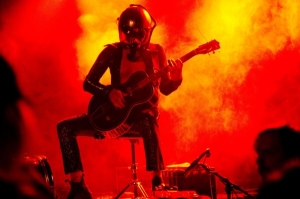 The Owl Magazine states, “One would have to be in a pretty foul mood not to be entertained by the mysterious awesomeness of Bob Log III. Sure, his musical skills are something to behold, his one-man-band brand of blues/Americana displaying dexterity, creativity, and plenty of good old rock ‘n’ roll, but then there’s his wacky persona.”

Bob Log III is not your average musician. Appearing on stage in a jump suit and hidden behind a racing helmet with a phone receiver attached working as a mic, he showcases his dexterity at performing as a one-man band with guitar and kick drum while singing vicious blues, Americana and rock. Described as loud, strange and electrifying, he’s like Jerry Lee Lewis crossed with a little of Tom Waits’ heavy industrial sounds.

Ramblings On My Mind – March 2017
Scroll to top