You are here: Home1 / Past PDX Blues Event 20132 / Dante’s Presents The North Mississippi All Stars with Lightnin’ Malcolm ... 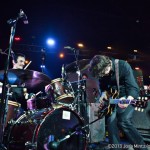 When it comes to Mississippi blues today, perhaps no one outfit spreads the sound around the world as much as the North Mississippi All Stars. Since breaking out in the late ‘90s they have taken the tradition of artists such as Fred McDowell, Otha Turner, R.L. Burnside, Junior Kimbrough and the likes, expanding it into their own feel and brought it forefront into the 21st century. But they had the proper upbringing for this flavor of music. After all Luther and Cody Dickinson are the sons of the late Jim Dickinson, one of the South’s most distinguished producers and musicians himself, who always felt that his sons playing together would amount to a great deal more than working with others. Not that some of those others have been just anybody off the street as individually they’ve played with The Black Crowes, Robert Plant, Jimbo Mathus, Alvin Youngblood-Hart and many more highly recognized musicians. Touring in support of their latest release World Boogie Is Coming, the All Stars are joined by another Mississippi legend, guitarist Lightnin’ Malcolm, on shows across the country. Malcolm has worked with many of the best from his home state, including Cameron Kimbrough and Cedric Burnside.

The North Mississippi All Stars and Lightnin’ Malcolm will be returning to Portland on Saturday, January 25th for a night at Dante’s, 350 W Burnside. Showtime is 9:30 pm and this is a 21 & over event only. Tickets are $18.00 general admission and available through www.ticketbiscuit.com. The band was one of this year’s highlights at the Waterfront Blues Festival, always a rock the house show, so don’t miss out.