You are here: Home1 / PDX Blues Event2 / Dave & Phil Alvin with The Guilty Ones Coming To The Aladdin Theater-Sept.... 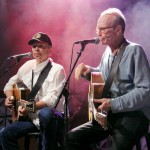 Some thirty years ago, brothers Dave and Phil Alvin broke out in Southern California with one of the most powerful bands of their time, The Blasters. They turned out one great song after another, including classics like “Border Radio” and “Marie Marie.” After many years of only occasionally working together, they released a tribute album to one of their blues heroes and early influences, Big Bill Broonzy, titled Common Ground that captured Grammy and Blues Music Award nominations and found them working at major blues festivals (including the Waterfront Blues Festival) around the country. The brothers are currently touring with their band The Guilty Ones to introduce material for their upcoming new release this month, Lost Time.

Dave & Phil Alvin will be performing at The Aladdin Theater, 3017 SE Milwaukie Ave., on Thursday, September 24. Tickets are available for $25.00 advance and $30.00 day of show through TicketFly.com. Minors are permitted when accompanied by a parent or legal guardian. Show time is 8:00 pm.