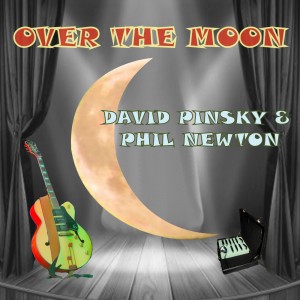 Over The Moon is a very intimate recording by David Pinsky & Phil Newton fully capturing the feel of the duet in a bare bones atmosphere. If you were to close your eyes it just might seem like you’re sitting in a back yard at a Mississippi fish fry or barbecue with the pair offering a personal performance. You can almost smell those ribs firing up as the guys lay down some greasy, Delta tunes to set the tone.

Guitar and harmonica duets have been a staple of the blues since time began and the best can really get your blood flowing in an excitable manner. Pinksy and Newton are definitely pushing those fluids through your veins here. They always seem to come across as if they’re enjoying themselves on stage and you get that same sensation here as the pair alternate on vocals for the eleven original numbers presented. That happens when you have two long-time friends who are remarkable musicians and enjoy playing together as often as possible. Throughout the album you are transported to happy times, lost loves and rough situations. In other words, you’re being given a plateful of the blues.

Kicking off with “Memphis By Midnight,” they open by telling of the troubles they first encountered to travel to Memphis for the International Blues Challenge, but the sensations and magic they found on Beale Street once they arrived. How can a musician not feel that overwhelming feeling knowing that they’re playing on that same street and venues where many of their blues heroes left their mark.

“The Devil Stayed Out All Night” takes on a “St James Infirmary” pace while Phil’s woman has left him while he still waits for her return. Maybe he should’ve listened when told not to stay out all night playing around. “The sun will come up this morning, the sun will go down tonight, yesterday she was here, today she’s gone, because you know I didn’t treat that girl right.”

David testifies on “One of These Days.” You know one of these days he’s going to get things right. On “Blind Man Needs A Cane” David informs us just how much he needs his baby while utilizing an easy walking blues on his guitar.

Deeply inspired by artists from the Delta, but within their own path, David Pinsky and Phil Newton serve up a very authentic collection of blues that are personal and can reach down to your heart. The pair compliment one another to the point that you can picture being in a conversation where one might finish a sentence that the other begins. And still stating exactly what was meant to begin with. That feeling is displayed precisely on the final track, “Your Turn To Go,” as the blend of harp and guitar are not over-powering and feed off each other. It is a beautiful piece that captures the mood of the entire disc and their musicianship in a nutshell.

These guys know the blues and know how to tell the story within a song. It’s feel good and down home music, carrying on the tradition in just the right way. No frills here, this is blues at its most basic and if you appreciate that, it’ll have you over the moon, too.