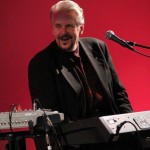 The DK Stewart Sextet’s CD For The Troops is an unplanned, live recording of the band performing at a fundraiser honoring returning soldiers and their families from Joint Base Lewis McChord’s Special Unit Troops. The afternoon included an air demonstration of vintage prop-driven and restored WWII airplanes in combination with antique auto and military equipment in Olympia, Washington. The resulting recording, newly repackaged and minted, features the DK Stewart Sextet exactly as it sounds on stage and will be distributed through military channels throughout the U.S. and various offshore military bases or facilities for the benefit and enjoyment of deployed personnel. Proceeds from this music will go to benefit the Madigan Foundation, USO, Families of Active Duty Personnel and various other charity foundations that aid the brave men and women who protect and defend our country.

To celebrate the For The Troops recording, The Trails End Saloon (1320 Main Street, Oregon City) will host a release party on Friday, September 11 at 8:00 pm.

King Louie & LaRhonda Steele CD Release Party At The Lake Theater –... Too Slim & The Taildraggers Back In Town – Sept. 10th
Scroll to top