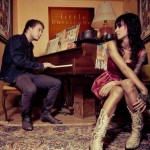 Based in Southern California, little hurricane is a dirty blues rock outfit born by way of North Park, San Diego. The band was formed in early 2010 when guitarist Anthony “Tone” Catalano and drummer Celeste “C.C.” Spina met through an ad on Craigslist. Oddly enough they both lived on the same street and had a similar jazz band background. They found a common interest in unique and vintage equipment and love of grimy, down and dirty blues. An old nightstand transformed into a speaker cabinet, vintage lamps, and ratty suitcases turned instruments are just a few of the things you can expect to grace the stage alongside little hurricane.

After finding success at Lollapalooza and on Austin City Limits, little hurricane has been touring the country constantly before appreciative audiences. They will be returning to Portland for a show at the Doug Fir Lounge, 830 E. Burnside, on Thursday, September 24, for a 9:00 pm performance. Tickets are available at TicketFly.com, $18.00 – $20.00, This is a 21 & over only show. Folk rockers Rin Tin Tiger will open the night.