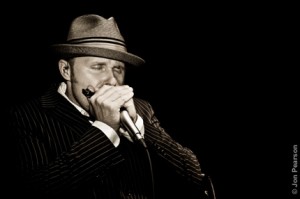 John Nemeth has surely come a long ways since his start in Boise, Idaho. He has definitely made a huge name for himself with his reputation as a harmonica player and one of the purest blues vocalists out there today. Besides taking his music around the world, what truly proves the point that Nemeth has made the big time is the fact that he has been nominated for nine Blues Music Awards over the past five years. Five of those this year alone including one for the ultimate prize, the B.B. King Entertainer of the Year. That in itself should be convincing that he is without doubt an artist to see in performance whenever the chance arises.

Well, here is the chance. John Nemeth returns to Portland for a show at one of his favorite venues in town, Duff’s Garage (1635 SE 7th), on Wednesday, July 17th at 9:00 pm. Touring in support of not just one, but two outstanding live CDs, Soul Live and Blues Live, you’re going to be able to hear songs from both discs and much more. This is a Cascade Blues Association co-sponsored event, where you can receive a $1.00 discount at the door by showing your current membership card. Admission is $12.00. This is one show you do not want to miss!