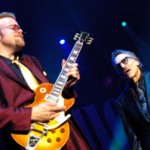 2013 Blues Music Award recipient for Harmonica Player of the Year Rick Estrin will be leading his always popular band The Nightcats back to Portland for what will definitely be another stellar night of fun-time blues. Estrin has been praised over the years for his sensational stage presence and crafty often humorous songwriting alongside his harmonica work. He is joined in the band by one of the most fierce guitar slingers to be found anywhere in Kid Anderson. Rick Estrin & The Nightcats are a party just waiting to break out, which has always made them a much in demand act in Portland and at festivals and venues around the world. Blues Revue describes the band as “rollicking and raucous, super-cool and hip…satirical, sharp lyrics and killer solos. It just doesn’t get any better than this.” More truer words have never been spoken.

Rick Estrin & The Nightcats will be returning to one of their favorite West Coast venues, Duff’s Garage, on Wednesday, December 4th. Tickets for the show are available in advance at www.tickettomato.com or at the door for $15.00. This is a Cascade Blues Association co-sponsored event, so bring your current membership card to receive a $1.00 discount at the door only. Duff’s Garage is located at 1635 SE 7th. Showtime is 9:00 pm.