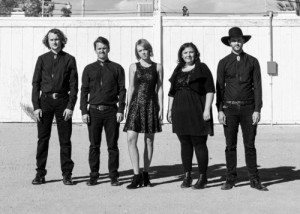 Will Wadsworth formed The Eagle Rock Gospel Singers in the winter of 2010 following a failed relationship, a band dissolution, and a scary airplane ride. To regenerate his interest in music, he and his roommate, Jeremy Horton, gathered friends together to sing old gospel songs. They sang songs inspired by their love of Washington Phillips, The Staples Singers, Mahalia Jackson, Sister Rosetta Tharpe — you know, the real classics — and held house parties just so they could perform. Soon enough, a large, shifting group of people came each week to join in on the weekly jams. There could be anything from 8 to 18 participants, depending upon the night. Wadsworth and Horton, realizing this might work in a club setting, pared down the group to core members and then began performing around Los Angeles. In 2014, they recorded their first album, Heavenly Fire, an explosive barn-burner, taut with electricity and highlighting Kim Garcia’s remarkable singing. It provides an articulation of their sound, honed over those many group parties, into a band that has become a rousing celebration of traditional Gospel sounds with rock foundations.

The Eagle Rock Gospel singers will bring their amalgamation of folk, blues, and gospel music to Mississippi Studios, 3939 N Mississippi Ave., 0n Sunday, January 31 for an 8:00 pm show. The event is a 21 & over concert, with mostly standing room and limited balcony seating. Tickets are available through TicketFly.com for $12.00 advance or $15.00 day of show at the venue.

Charmaine Neville and Reggie Houston Reunite For A Night At Jimmy Mak’s: Jan,...
Scroll to top