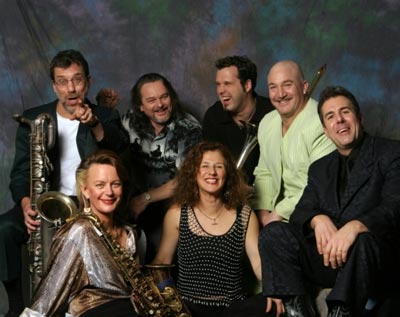 Take one red-hot horn section – we’re talkin’ alto, tenor, baritone saxes and trombone – down and dirty. Add liberal amounts of barrelhouse boogie-woogie piano and stinging Fender guitar. Pour over a funky and swinging rhythm section that Blues Review magazine called “the best in the business”, and top it all off with a crazy and charismatic front man, Eddie Scheer, with one of the biggest blues voices around. Season with a few years on the road tearing up juke joints, festivals and concert halls across the U.S. and Canada and on both sides of the Atlantic. Sound tasty? It’s a recipe for music and mayhem, for intensity and irreverence; it’s The Love Dogs.

It has been about five years since The Love Dogs last played in the Portland area and they’re just itching to head back. The Love Dogs will be appearing at Duff’s Garage (1635 SE 7th) on Sunday, May 12th. Don’t forget to bring your CBA membership card to receive a $1.00 discount at the door as this is a co-sponsored event. Get ready to have some fun; you do not want to miss out on this one!

The Return of Terry Hanck